Join us as we stop by this shop on the Nolita Coffee Tour! 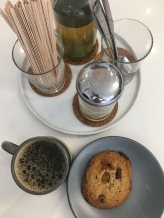 Must Try: Pour-over (Ask about the lighter roast Nicaraguan coffee that is most interesting at that moment!) and the Keith Moon Pie Cookie from Rubyzaar Bakery or try the Ham and Cheese croissant sourced from D’epana (an adorable Spain Imports shop and cafe in the hood)

Roaster: Cesar does it all sources, buys and roasts!

Cesar Vega, Roaster and Founder for Cafe Integral, is unassuming and approachable on first impression.  He gives off the vibe of the easy-going boy-next-door.  His open expression feels mask-less, and empty of performance.  Yet when you start to chat with him about coffee, Cesar’s expression opens even wider, the entropy of his joints increases and he turns into  something conductive—a live wire for all things Nicaraguan coffee.

The Origin Story of Coffee and of Self

The story of Cafe Integral on a block of Nolita rich in coffee-talent is Cesar’s story.  Growing up in Miami with the flavors of his mother and grandmother’s Nicaraguan cooking, he became a person who filtered his identify through his palette and his heritage.  He also became an intensely one-track-obsessive learner—before his current state of coffee-immersed, he was absorbed in music and engineering, during separate time spans, as only the one-tracked can be.  Yet once he set himself upon Nicaraguan coffee, his journey was unlike any other roaster in New York. 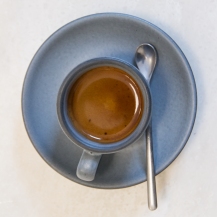 Nicaragua did not used to be a place of envious origin in speciality coffee; it certainly wasn’t when Cesar moved to his country of heritage to meet every coffee grower he could find.  While most coffee roasters and buyers first start as baristas or continue to the family business, Cesar began his own independent studies in Nicaraguan coffee by just moving there.

In 2008, he worked in the mills for a harvest.  He met every coffee grower he could find.  In 2010, he earned a license as a Q grader, a certification that allows people with advanced palettes to grade the quality of coffee at ports.  He tried to diagnose what was holding Nicaraguan coffee back.

He bought the best—a couple of thousand pounds of green Nicaraguan coffee beans, moved to New York and kept it in his two bedroom apartment in Washington Heights.  At the time he thought, I can sell this coffee.   He thought, this coffee is just too good for people not to buy it.  He thought, once they taste this coffee… He now thinks that his approach was a bit naive.

Cesar’s one-track mind led him right back to his own place of origin and it created a great place for your next cup of coffee.  It is an important stop for Nolita Coffee. Or consider stopping by as part of our coffee tour.  When you stop by Cafe Integral, you are stopping in on one of the greatest personal journeys in New York coffee.  Get the coffee for here, sit in the cute blue velvet wraparound side table and sip out of beautiful pottery.  Often Cesar will be at the espresso machine, electric and open to chatting about where the coffee comes from.