Six Words or Less: Community Slice in A Nomadic Spot

Location: 2 6th Ave, at the corner of 6th Ave and White Street

Amenities: Pastries, Cold Brew on Tap, Juice in Fridge, (as part of the hotel lobby of The Roxy Hotel) bathrooms, seating and wifi, outdoor seating in seasonal weather

Jack’s Stir Brew, which has multiple locations, runs on a steady stream of espresso and personal mythology.  Local owner Jack Mazzola (I was told by the proud barista Q) developed his patented stir brew method which uses an oscillating wand to stir the grinds while water makes its way through the huge drip basket.  Jack’s epic journey began on West 10th Street in the West Village as he was driven to find the best method of home brew.

His quest extended to relationships with coffee farmers and now extends to running his own bakery filling the counters and pastry cases of all Jack’s Stir Brew locations.  Fueled by a family story of strong work ethic and honest interest in quality (as well as some fun, sweetened drinks called Local Favorites on their menu board) Jack was one of the pioneering coffee enthusiasts bringing third wave coffee to the previous stale-drip caffeinated urban folk.

In this particular space, inside the new Roxy hotel, the jazz-themed open lobby–is that a drum set permanently set up on the table-level stage?– is circled in bricks laid in a herringbone pattern.   The baristas are friendly and the locals or regular hotel guests create a sort of easy bustle that can’t be found in your national chains. 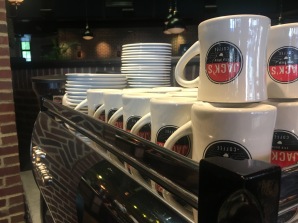 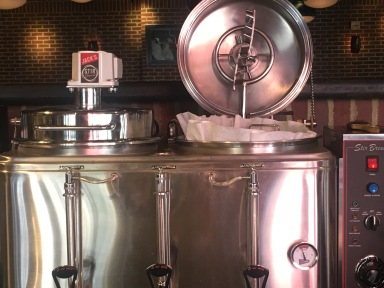 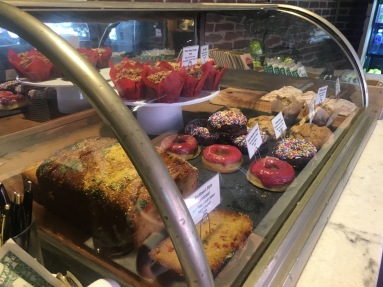